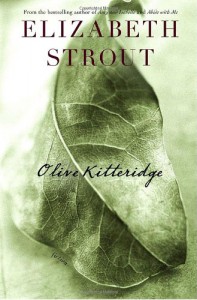 This collection of linked short stories centers around Olive Kitteridge, a retired math teacher and mother of a grown son. The stories examine Olive from every angle. She is the main character in some of them and briefly mentioned in others, but they all show the impact that one woman can have in a small town.

Olive is a complex and fascinating character. She is big, loud, blunt, and opinionated. She is self-centered, abusive, judgmental, unkind, and manipulative. She refuses to apologize for her mistakes. She eavesdrops and talks behind people's backs. Many of her students were afraid of her. She is independent, strong, funny, and in control. She is amazingly perceptive and willing to help anyone who needs it. She loves her husband and son fiercely. She is a very realistic human being.

Like most short story collections, I did get bored with a few of the stories. I also felt like a few of them went over my head. The author was saying something deep that I wasn't quite getting. However, the majority of the stories are brilliant. This book is entertaining and beautifully written.

The stand-out stories for me are "Pharmacy," "A Little Burst," "A Different Road," "Ship In A Bottle," and "Security."

In "Pharmacy," Olive's husband develops a crush on the plain and unassuming (and complete opposite of Olive) young woman who works for him in his pharmacy.

In "A Little Burst," Olive's only son gets married to a woman who Olive does not like, and she finds small ways to make the woman's life difficult.

In "A Different Road," Olive and her husband are held hostage in a hospital bathroom by a gunman, but the argument that they have while trapped in the bathroom is the most traumatizing part of the experience. I love the humor in this story. It's tied with "Security" as my favorite in the collection.

In "Ship In A Bottle," an eleven-year-old girl knows where her older sister (one of Olive's former students) has gone, but she doesn't tell her crazy mother.

In "Security," Olive goes to visit her son for the first time in years and ends up causing trouble in the airport security line.

I have to warn you that many of the stories in this collection are depressing. The characters' emotions are raw and realistic. But, if you don't mind that, this is a great collection.